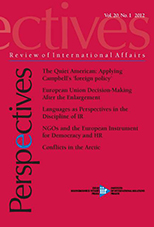 Summary/Abstract: The purpose of this article is to outline important developments in the European Union decision-making after the eastern enlargement and to draw attention to their likely implications, especially to the threats they may pose to the functioning and democratic quality of the European polity. Starting with an observation of the trend of the informalization of the European political process, I outline a theoretical argument about the likely emergence of structural divisions among the member states in the Council of Ministers. On the basis of a simple spatial model I show that the informalization of the political process can be expected to lead to important changes in the Commission-Council interaction and, by implication, to the emergence of a stable group of MSs within the Council with a privileged access to the Commission in the long term. I illustrate the validity of the argument with the use of a computer simulation. The article does not present new empirical data; instead it attempts to provide an explanation for certain empirical patterns identified in recent literature and shed light on the strategic incentives of actors in the European decision-making process.