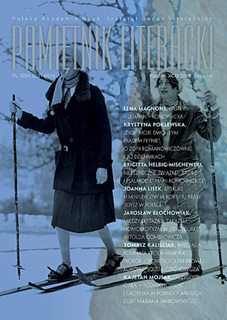 Summary/Abstract: Bolesław Leśmian’s theory of rhythm, which he expounded in his famous article “Rhythm as a word view”, interestingly corresponds with the conception of the Semiotic by Julia Kristeva. For both the rhythm is the primeval dimension of language, connected with a creative side of the nature from which the man has irretrievably been separated. Leśmian illustrates his theory with the example of one of Maria Konopnicka’s poems from her cycle “From Meadows and Woods”. Following it, the author of the paper analyzes the role of the rhythm in the literary activity by Konopnicka, who was often disparaged with easy formulas of “stylization” or “sensation of peoples’ misery.” As a result it seems that in the poems that use the structure of melic folk poetry privileging natural, physiological rhythms, Konopnicka managed to introduce a woman’s body, and to retrieve a forgotten mother language.