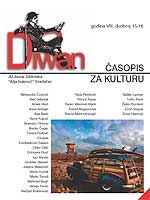 Summary/Abstract: Mihajlo Pantić, Dubravka Đurić and Zoran Bognar have made an ”inside/outside”, according to their own aesthetic viewpoint, and present three selections of Serbian poetry accompanied by appropriate programme texts. We believe that these anthologies and the poetic approach are of multiple value: to the readership in Bosnia and Herzegovina as information about the poetry from ”over there”, and to the criticism scene in Serbia as a corrective, because Đurić, Pantić and Bognar have subversively intervened in the rigid cannon of Serbian literary-assessment practice. In Dubravka Đurić´s selection: Judita Šalgo, Radmila Lazić, Ljiljana Đurđić, Ivana Milankova, Nina Živančević, Jelena Lengold, Jasna Manjulov, Jelena Marinkov, Danica Vukićević, Dubravka Đurić, Snežana Žabić, Natalija Marković