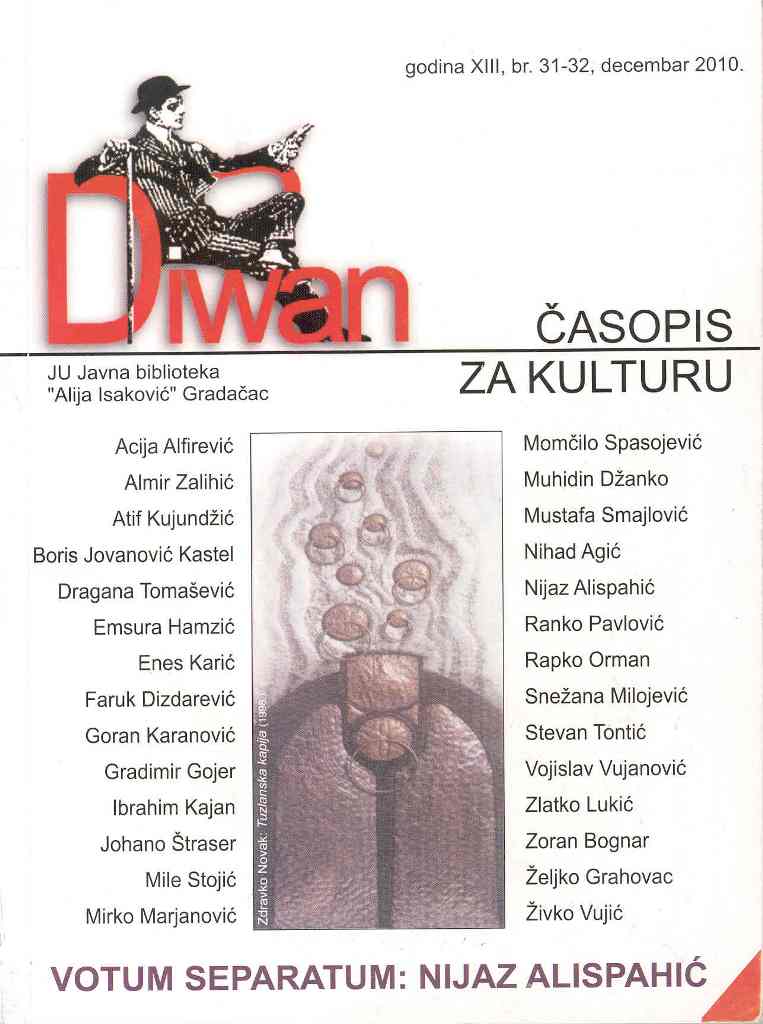 History "Diwan" was founded in 1998 in Gradačac, and was conceived as an annual newsletter-almanac that would publish contributions from the Gradačac Literary Meetings (Kikić’s Meetings): literary works of affirmed writers and literary theoreticians, as well as those of upcoming writers and works related to librarianship. The PI Public Library "Alija Isaković" Gradačac was instituted as the publisher of “Diwan”. The need for a new periodical was confirmed by the significance of the Gradačac Literary Meetings, a traditional literary manifestation on the federal level in ex-Yugoslavia (Kikić’s Meetings). Seven editions of “Diwan” were published: with the editor-in-chief Mirso Šarić No. 1 (in 1998) and No. 2 (in 1999), and with the editor-in-chief Dinko Delić the double issue 3-4 (in 2000) and the double issue 5-6 (in 2001), the double issue 7-8 (in 2002), the double issue 9-10 (in 2003) and “Diwan” Intercultural (translations of selected texts into English, in 2003). Editorial board and conception The “Diwan” editorial board has employed such eminent scientists and writers as Alija H. Dubočanin (Sarajevo), Šimo Ešić (Tuzla), dr. Nedžad Ibrahimović (Tuzla), Amir Brka (Tešanj), mr. Vojislava Vasiljević (Tuzla), Željko Grahovac (Zenica), Aleksandra Čvorović (Banja Luka), Dinko Delić (Tuzla), Vaska Sotirov-Đukić (Sarajevo), Bojan Đukić (Sarajevo), Dragan Šimović (Mostar), Mirsa Šarić (Gradačac) and others. The profile of the magazine is determined by its tendency towards the deconstruction of platitudes about “great” and “small”, “old” and “new” nations, about “central” and “marginal” cultures, about “traditionalism” and “modernism”. The editors of "Diwan" have shown a sense for diverse contents. “Diwan” is set up as a magazine in which, in stead of categorised forms (sections), semiotic and visual texts follow one another in the omnibus fashion: essays and prose are interspersed with poetry and illustrations. The graphic design of "Diwan" is provocative (a pseudo-oriental style in the first two editions), yet simple and attractive (with an allusion to pop-art in the subsequent editions – authors: Art Creation Service, Bojan Bahić & Sanda Hnatjuk, members of ULUBiH (the Association of Visual Artists of Bosnia-Herzegovina)). Since Spring 2002, "Diwan” has also been published on-line at its web site http://www.diwanmag.com.ba Authors In only a few years, “Diwan” (as a project undergoing transformation) surpassed the local horizon and, having overcome the borders of the entity and of Bosnia-Herzegovina, restructured itself from an almanac into a cultural magazine that has published the works of over 130 authors. These were both affirmed and young talented writers/theoreticians from all over Bosnia-Herzegovina and the former Yugoslav states as well as from abroad.