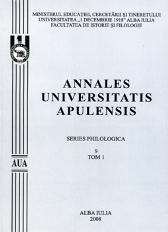 Summary/Abstract: The study is a minute comparison between four translations of the Psalter into Romanian language, aiming to point out the remarkable achievement of 1673 version. Dosoftei’s first ever versifying of this religious text into Romanian culture is unique due to the folk traits of the literary language the scholar used in order to localize the poetic expression of the sacred and to make it more appealing to a large amount of readers. Last but not least, the so-called “profane” image of the newly achieved poem was the author’s subtle way to express his political stand-out against the pagan Ottoman empire, looked upon as the enemy of God, whereas the Romanians were considered as wholly warriors.