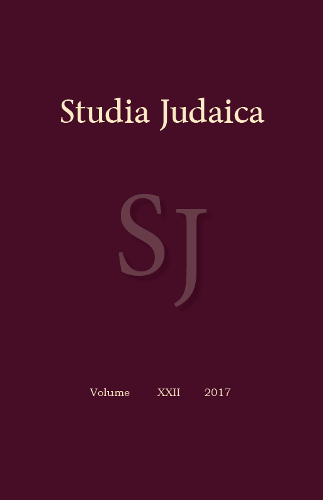 Summary/Abstract: A very rich and varied Yiddish press developed in Romania in the second half of the nineteenth century, encompassing around sixty-two periodicals, of which I have examined fifty. As early as 1874, a number of those journals presented a motivation for choosing to publish a newspaper in Yiddish. This article will endeavour to highlight the development of that motivation and to show what arguments the newspapers’ editors used in justifying their choice. Besides arguing that Yiddish newspapers were necessary because Yiddish was the only language understood by the majority of the Jewish population in Romania, the editors also expressed their belief that Yiddish journals were an effective way to educate people on subjects besides religion. The maskilic argument in favour of using Yiddish newspapers as a means to spread secular knowledge was completed towards the end of the nineteenth century by a nationalist rhetoric, which stressed that Yiddish newspapers were an effective tool for constructing a national consciousness among Jews. As the editors concluded, Yiddish newspapers contributed significantly to the consolidation of the spiritual cohesion of the Jewish people, and helped them become aware of their Jewish identity, while protecting them from assimilation.