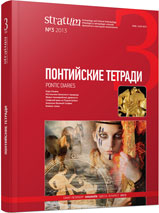 Summary/Abstract: S. R. Tokhtasyev's new article demonstrated that ethnonyms Σαυρομάταί/Σαρμάταί contain “the common morpheme -μάταί”. We think it makes us to consider both Sauromathians and the more later Savirians, which were localized in the same region. The clearly seen continuity of ethnonyms in this region (from Sauromatians and Savirians to Severy/Severeane and Sevruky) gives us a chance to use the modern anthroponimy of the region. We researched the anthroponomical model with suffix -ai in Russian historical area in the context of pre-Slavic substratum. We found out that Russian surnames with postfix -aev, -iaev, that derive from names with suffix -ai, are more popular in certain regions — especially in Tverskaya and Kostromskaya areas, Mordovia and Mari El. The same (and more evidently) regularity demonstrates the more superior -i-postfix anthroponomical model. We suppose that this heightened frequency of Russian surnames generated from Slavic names on -i in the regions named above (especially in Kostromskaya area) is caused by influence of certain Finno-Ugrian peoples, namely Merens, Mari and Mordovians. Though, the genesis of this -i-model should be ascertained both for Slavs and mentioned Finno-Ugrian people. We think that it could help us clarify the question of ethnic nature of Sauromathians and Savirians as well.