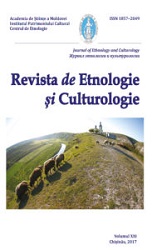 Summary/Abstract: The funeral tradition of the Ukrainian village Bulaesty (Orhei district, Republic of Moldova) includes a very important and interesting ceremony of passing two hens over the tomb pit. The semantics of this ritual is very interesting: people say that hens are passed in the purpose that they “will shovel the soil from the grave when the dead will be summoned to the Last Judgment”. That is why the hen’s legs must be untied before being passed over the grave. It is important to emphasize that hens can’t be replaced by cocks in the ritual, nor by any other birds or animals, which is strictly forbidden. If the person does not have hens, the only possible exception is two fishes that must be with heads. The closest analogies for Bulaesty’s tradition are known in the East Romanian area as well as among some Slavic groups (in Bucovina, Northern Russians, and, more distant, in Serbian Krajna). However, at least one or more key features (like “a hen will shovel the soil from the grave” explanation; the prohibition of hens’ replacement by cocks; fish as the only possible replacement of hen; and some other) make the Bulaesty’s tradition clearly distinct from the East Romanian one (including some neighboring Moldavian villages), as well as from the Slavic analogies. Therefore, it looks like it is the Bulaesty’s tradition that conserved better the archaic features of this ritual in both its semantics and structure.