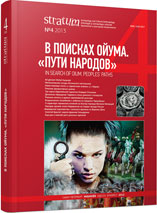 Summary/Abstract: For the European Sarmatia Ptolemaeus had almost no information about how peoples were related to rivers. Reconstructed map has clear zones of the “loose linkage” between the names: the map is divided into the Baltic and the Black Sea areas. There were three different maps: map of peoples along the way next to or along the Vistula river and the coast of the Gulf of Venedae (map “Vistula-Baltic” as part of the map “Germany-Baltic”), a map of the peoples of the South Sarmatia, Dacia and the Carpathian Mountains to Rhipaean Mountains (map “Carpathians-Rhipaeoi”) and the map “mountains-rivers-settlements” from Vistula to Maeotis, which may already contain information on the coordinates. At the very least, the northern part of the third map used by Ptolemaeus, was written in the Old Roman Cursive. This hypothesis may help to identify two peoples: Stavanoi and Kareotai. Indeed, judging by the plates from Vindolanda, one of two common forms of the Latin letter L, namely the so-called “short” form could easily be confused with the letter T. The form *careolae can be compared with the Karelians — one of the eastern branch of the Baltic-Finnish population. This “Karelian” hypothesis can be correlated with the “Tarand” hypothesis, which states that “Karbones” (‘coals’), geographically related, according to Ptolemaeus, with Kareotai, are to be designated to the people or culture of the cemeteries with stone fences (Tarandgräberkultur) — common ancestors of Livonians, Aestii and Finns.