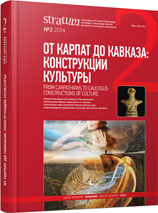 Summary/Abstract: After more than two decades, fieldwork has been renewed in Maydanetskoe — one of the largest settlements in the area of the Tripolian Culture between the Southern Bug and Dnieper, which was earlier excavated between 1971 and 1991. According to the new results of geomagnetic survey carried out in 2011—2012, the settlement has an area of about 210 hectares. The main objective of the new excavations was the field validation of the anomalies from the geomagnetic plan, which earlier were not identifiable with a certain complex type — pits with usual filling or filled with burnt daub remains. Some of the discovered complexes could have been bound with ritual activities. Also, we have studied the remains of a wattle-and-daub construction with a thick clay floor plastering. The results of the campaign justify the necessity of further investigations of the site.