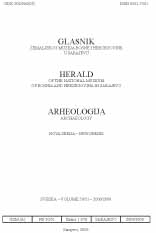 Summary/Abstract: Present studies in Central Bosnia have, through the excavation in Okolište, illustrated the potential of an approach to excavation that (with the help of geophysical prospection) purposefully opens excavation surfaces in which exemplary function areas of the settlement can be identified. In this way, it was possible to excavate specific dwelling ground-plans inside the settlement and to probe a section of the system of defences. The excavations will continue in order to examine both the Okolište ditch system and the differences in elevation visible in the settlement mound between housing areas, with special emphasis on chronological or functional differences. On the one hand, the finds of human bones in the ditch area (see p. 101) suggest possible additional functions of the ditches, on the other hand, fine chronological differences between households are indicated. Clear differences were also observed between Obre II and Okolište in types of construction as well as in the supply of material culture. The probes of neighbouring settlement mounds of the Visoko basin were all the more important in that they helped clarify the significance of such observations: were these settlement-hierarchically determined differences between the central village of Okolište and smaller settlements like Obre II or were they cultural-spatial differences between the Late Neolithic Visoko basin and the adjacent settlement landscape to the north? An additional, assosiated qustions aims to identify which of the factors, already established by a range of evidence, is actually responsible for the centrality of Okolište. The present reconstruction of the economic system leads, on the basis of a needs-calculation, to the conclusion that the area of available forest meadow was not sufficient for stock raising; additional range may have been provided by the topography of the Visoko basin. Correspondingly, in addition to archaeobotanical studies among others at Okolište, there are studies in the surrounding areas providing palynological evidence suggesting possible stock raising in the tertiary mountain regions. In addition to these economic-archaeological studies, it is primarily the typochronological studies of the material culture of the Late Neolithic Visoko basin that connect our test region to supraregional fields of interaction. It is already clear that the most diverse spatial levels can deliver answers ranging from activity area and household to settlement organization and regional landscape structuring and beyond those to connections with the communication regions of the Adriatic and central Danube. Structurally, this makes it possible to conduct comparative studies not only among other southeastern European regions, but especially to the central European region.