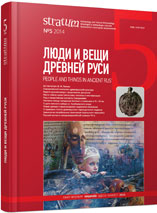 Summary/Abstract: Leningrad Neo-Normanizm as a direction in Soviet archaeology (mid-1960s—2000s) started its development in the general context of the evolution of social consciousness in the last decades of the Soviet Union. In 1970s—1980s, this direction pretended to generalize research results on early Medieval sites from a vast territory of Eastern Europe. In modern Russia, Leningrad Neo-Normanism quickly loses its relevance. The main lesson of Leningrad Neo-Normanism is that archaeology of the Early Rus' is still a historical archaeology. Contestation of its ideas undertaken by supporters of the South-Baltic hypothesis about the emergence of statehood in Early Rus' also leads to a deadlock, for it does not address the uncertainty of chronicle accounts, which underlie both directions.