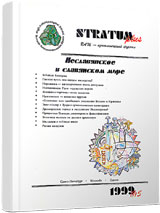 Summary/Abstract: The town of Uglich in XII-XVI centuries used to be an administrative, trade, manufacturing and religious center of the territory in the Upper Volga basin. Until recently, no archaeological site of the late I millennium A. D. has been known in Uglich providing evidence of existence of Northern Europeans in this region in the early Middle Age. At the same time, the finding of the Arabian Silver treasure in 1879 on the outskirts of Uglich suggested involvement of Uglich region along Volga bank in the Eastern European trade ways system already in IX century. As Scandinavians took active part in this process, their penetration in Uglich region of Volga bank looked very much possible. The evidence supporting this assumption was received in 1992-1995 during excavations in the North-Eastern part of Uglich Kremlin. Among the most important findings there were three tops of sword sheaths, a fibula with an image of animal heads, dirhams coined in 942/943 and others. Based on the findings of Scandinavian origin and stratigraphic data, the author concludes that a Scandinavian cemetery of bodyguards used to function on a part of the territory of the future Kremlin. To prove this idea, the author of the article uses data of the local toponymy, Uglich chronicles and legends spread among the local population in XVIII-XIX centuries.