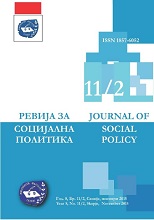 Summary/Abstract: Winston Churchill (1874-1965) gave a new political vision to the state, with an emphasis on the welfare and social and economic rights of citizens who should be provided with the rights of the state, which will, according to him, avoid the catastrophic risks coming from the Marxist socialists. Churchill will emphasize: "... until the Liberal Party is going to withdraw from some of its views, which make it a champion of all forms of freedom ... it is high time to regain that political freedom, however much it is' sacred, is absolutely incomplete without minimal measures of social and economic well-being ... ". Expressing confidence in modern liberalism (liberal democracy), he demanded that the state oblige itself with care for its citizens. According to Churchill, this is one of the main goals of liberal democracy.