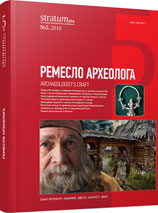 Summary/Abstract: jewelry; stamping; ornamentation; styles; stylistic group; stylistics; chronologyStamping began to develop in Old Rus from the second half of the 10th century. The top level of the stamping came up to the 12th century, when it transformed into self-sufficient jewel mode and was working out its own ways of ornamentation and forms of jewelry items. Some of these items played an additional role in the metal attire and costume: chains for ryasno (necklace), beads, pendants for diadems. The other played more important role: they joined the metal attire and costume into one stylistic ensemble and served as a sign of social — princely — rank. These items were ornamented in vegetal style: necklaces of crin-shaped pendants and sewn-on metal plates.At the beginning, stamping technology used geometrical and scroll ornaments of granulation and filigree and the techniques of perforation of metal plate and engraving. However, such methods did not entirely correspond to the facture of a thin metal plate. The embossed and vegetal ornamentation could best reveal the aesthetic possibilities of stamping.The monograph studies typology and stylistics of 1015 stamped jewel items. They correspond to such main categories as: pendants to diadems — 23; temporal rings of beads — 24; ryasno-chains — 78; beads for necklaces — 237; pendants for necklaces —76; sewn-on metal plates — 550; buttons — 10. Seventeen matrices for these items were also used.Based on the revealed stylistic groups for each category, all the items are distributed into several styles: I — geometrical; II — wave-shaped; III — scroll-shaped; IV — vegetal (crin-shaped); V — wattled; VI — splendor. Three stages are defined within the vegetal style: geometrical, natural and exaggerate.In order to establish the dating of the typological subdivisions and stylistic groups of the stamped items, some analogous items with archaeological stratigraphic dates have been used. As for the dating of styles, some wider parallels among artefacts of medieval art have been used.As a result, the following dates have been received for the styles: geometrical — 1050—1150; wave-shaped — 900—1230; scroll-shaped — late 11th c. — 1150; vegetal — the middle of the 11th c. — 1230; wattled — the middle of the 12th — early 13th centuries; splendour — the turn of 12/13th — 13th centuries. It became possible to define the time for the three stages of the vegetal style: geometrical — the middle and the second half of the 11th c. — 1150; natural — the 12th century; exaggerate — 1150 — 1230.Sets of jewelry items have been distinguished for each style and stylistic stage.Based on analysis of typological forms and constructional details of the items, the author offered some preliminary reconstructions. They help locating the place of surviving details within the whole construction of an item, as well as revealing the role of categories in the metal attire. The resulting reconstructions give an idea of the complete variants of the stamped attire.Double chains-ryasno, combined of the stamped miniature «logs», narrowed from 3,0 cm to 2,0 cm. The length of the chains shortened simultaneously with the decrease in the width: 20 cm, 12—13 cm and 10 cm. The ending «logs» of the ryasno-chain of triangle form appeared, the chain became singular. Universal chains, combined of stamped links with wave-shaped ornamentation, had appeared by late 12th century. All these modifications led to the forming of lighter chains, suitable for different types of kolts.The beads, ornamented only by stamping, were used in necklaces of crin-shaped pendants.The type of crin-shaped pendant (trefoil and tetrafoil) was worked out for special necklaces which belonged to the best achievements of the Russian jewelry art. The stamped sewn-on metal plates and crin-shaped pendants shaped the stylistic ensemble.The tradition of ornamentation of the aristocratic costume by crin-shaped adornments and their combinations penetrated into Russian court culture from Byzantine Empire. Trefoil ornaments were emblems of princes and their power. Necklaces could have in their composition a pendant with the figure of Michael the Archangel and were connected with the image of the divine patron of the Russian princes.Spread of stamped metal sewn-on plates shows the tendency of the metal attire to unite with the costume. The seldom preserved examples of the attaching of the metal plates to the clothes are used for the reconstructions.Ornamental compositions of vegetal elements, known by works of different arts were also used as a source for ornamental reconstruction made on the basis of stamped jewelry.As a result of this small investigation, the author offers a chronology of stamped jewelry items and explains their role in the costume. Also, it became possible to understand the historical and cultural role of the stamped trefoil items in Old Rus. In Russian metal attire, they passed a way from some additional details and background ornamentation to the important laconic emblem of princely power.