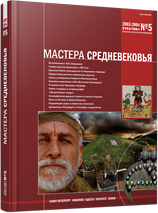 Summary/Abstract: The material upon filigree, famous from Slavonic and Russian hoards of VIII-X centuries, is analyzed in this monograph. The main idea of analyze is in the combining of the three types of data: technological, typological and stylistic.The typological definitions of the things had been done. The styles of filigree art of the period are characterized, their typical stylistic elements are defined. These styles are: the volume-geometric, partition, line-geometric, geometric, archaic and scrolling. The technological data upon the methods of filigree production, received with the help of visual study of the jewelry items by the binocular microscope, are given.The filigree items from the Hariyev hoard of VIII century had been producted in Byzantine technology, but with the local features. The own treating of the Byzantine prototypes is also observed in the forms of jewelry.In IX – the beginning of the X centuries some previous types of jewel items continue to exist: star form of temple rings, sphere shape of ear rings. New types also had spread. Filigree original forms of ray types of temple rings may be supposed, simple cast ones are known in the hoards and settlements of this period. The first examples of bunchtype temple rings appear. Seldom variants of hybrid character are famous. This confirms the local process of the creating of the forms of jewelry on the phone of the foreign influence.The main categories of filigree material from the hoards of X century are analyzed: bunchtype and bead temple rings; beads; disc shape, semi sphere round and lunula pendants to necklace; beads pendants; the jewel for arms and the subjects of cult.The items in the volume-geometric and partition styles are the earliest: IX - the edge of IX-X centuries. The things in line geometric style of early stage exist in the first quarter of X century, - of developed stage – in the second quarter of X century. The scrolling style prevails in this time on the items of foreign origin. Up to the middle of the X century the geometric style had been formed, and in the second part of the century it had spread widely. The original Russian archaic style emerged at the end of the X and in the beginning of the XI centuries. The typological and stylistic development coincide.The using the fragments of the large section wire of different dimensions as the supplies for granules, the using of twine filigree and wire of large diameter (round 1,0 mm) may be dated by the edge of IX and X centuries. This is the local tradition.At the middle of the X century the two main traditions are defined: beaded wire and twine filigree with diameter 0,5 mm. The using of beaded wire is characteristic for the group of the items of foreign production of the first half of the X century, fulfilled in Byzantine and north-European tradition.The local tradition of the production of the granules from the irregular fragments of metal is connected with the line geometric and geometric styles. It had been prolonged up to the XII century. Such granulation is combined with different types of the filigree. During the X century Russian craftsmen gradually began to product more standard granulation with the using of rings and equal fragments of wire as supplies.So the emerging of the first methods of filigree production dates by the edge of IX and X centuries, but the high level handicraft had been formed up to the XI century. The local tradition is connected with the items of geometric styles, the Byzantine-European tradition – with partition and scrolling styles.On the material of X century we can observe the emerging of the bead temple rings on the base of local tradition of wearing in the head gear - from one side, and by the way of the acknowledge with jewel types of the beads of more high Byzantine jewel culture, represented on the bunchtype rings – from other side. The main categories of the jewel items from Russian hoards were the things of common Slavonic spreading and production, but in every land, and also in Russia, their way of development was original.