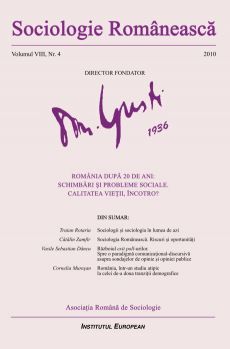 Summary/Abstract: The present study analyses the controversies around surveys and exit polls that were conducted during the last election campaigns in Romania. Three aspects emerge following the analysis. First issue is the competition for the symbolic construction of the political field, competition in which the surveys’ discourse collides with those of the politicians and the media. Secondly, the interaction between the interviewer and the respondent could be regarded as similar to a process of symbolic violence, which may generate distortions. Thirdly, the study also advances theoretical adjustments concerning public opinion analysis and the survey practice, from the point of view of a discursive, interactionist communication paradigm, within which the survey is seen as a scene for interaction, and, if it touches on a controversial issue, could cause the genesis of certain public opinion elements and could lead to the gathering of an audience. The author asserts that individuals have a certain mental representation of the common opinion and that they adjust their own opinions according to what they believe the common one is. The purpose of the climate of opinion is not that of social regulation or of social control; public opinion is a mechanism of mutual adjustment that enables people to be aware of and to take into account what other people are thinking. Surveys capture fragments pertaining to regular citizens’ discourses; these ordinary citizens are not content with applying interpretative frames conveyed by the media, they mobilize their own experiences and interpersonal discussions in order to negotiate the meaning of political issues.