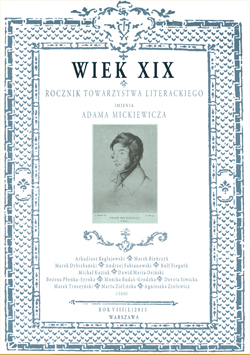 Summary/Abstract: The research purpose of the article is to formulate a proper assessment of Mickiewicz’s last initiative – the formation of the so-called Jewish Legion during the Crimean War. The applied methodology, the hermeneutics of literary and biographical meanings requires an approach from the perspective of the entire oeuvre of the poet. The Jewish Legion was to be a fully material work of art, empirically distinct, and at the same time it was supposed to point to a spiritual backstage of earthly realities. The reality was only supposed to – as in the earlier works of Mickiewicz – point to a transcendent realm. The Jewish Legion was also an attempt to start the intervention of Providence in human history; it was supposed to be a kind of modern tikkun, force God’s actions in human history. In the adopted research perspective The Jewish Legion reveals its multiplicated face. It is a testament of Mickiewicz’s historicism and faith, which drew inspiration from both Christianity and Judaic traditions.