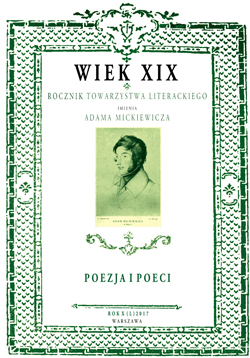 Summary/Abstract: The article discusses the relationship of Lithuanian poetry with the Polish literary Romanticism in the context of the Lithuanian national movement and the emancipation of Lithuanian culture in the last decades of the 19th century. This link is usually seen as motivated by the resistance of the Lithuanian society against the oppressive Russian imperial politics and by the rise of Lithuanian modern nationalism. These forces caused the later split of the heterogeneous and multilingual Lithuanian-Polish cultural tradition. The article focuses on the process of literary communication in the field of post-romantic poetry, which was characterized by the notion of poets’ “belatedness”and the attempt to find the chance for originality in the shadow of the great Romantic forerunners. The case of the main Lithuanian poet of the period – Jonas Mačiulis-Maironis (1862–1932) shows that the break with the Polish literary tradition was also caused by one other need – the will of the “strong poet” to find his own voice. This turn was not culturally radical in the beginning: it implied the vision of the equal dialogue between Polish and Lithuanian cultural and social fields. Tis vision, however, attained little resonance in the Lithuanian society, and the departure from the Polish literary and cultural models became obvious in the Maironis’ poetry a decade later.