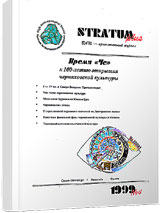 Summary/Abstract: The settlement near the village of Velikiye Budki in the Nedrigailovo district of the Sumy region (the North-Eastern Ukraine) is one of the largest and the most interesting sites of the Kolochin culture. It was explored in 1981-1982 by the Dnieper left bank expedition of the Institute of Archaeology, the Russian Academy of Sciences. It was ascertained that all materials at the site divided into two groups: of the Early Roman and the Early Middle Ages periods. A number of fragments of ceramics has exact parallels on settlements and cemeteries of the Late Zarubintsy culture of the II — the beginning of the III cc. in the Seim-Donets region (fig.43:1-8). The dwelling 7 and the pits 22 and 26 also belong to the Late Zarubintsy culture. Some objects of the Ukhnovo culture which were found on the settlement of Velikiye Budki (fig. 44:14; 45:5; 43:18) may be related to this group of things, and it gives us the opportunity to raise a question about relations between Late Zarubintsy and Ukhnovo cultural-ethnic communities in the Seim basin. The majority of the finds at the site and the complexes of structures 1, 3-6 and pits 1-21, 23-25, 27-37 belong to the Kolochin culture of the V-VII cc. Only the materials from the dwelling 2 (fig. 11:1-11) have real parallels in early Pen’kovka or late Kievan antiquities of the east part of the Dnieper basin. Some finds from the settlement can give an important indication about the existence of the whole craft zone here which is related with jewelry and work of blacksmith. Among them there is a hoard conditionally related to the so-called «Hoards of Antiquities of Antes». The objects in this hoard can be divided into three groups: fragments, raw materials, finished articles (fig. 47-49). The first group includes the fragments of a large silver radiate-head fibulae and a silver anthropozoomorphic fibulae, the end of a silver neckring, two fragments of silver bracelets with thickened ends, a half of a bronze bracelet with a greatly thickened cut end, the bronze catchplate from a belt-buckle, a large lamellar decoration and also a lamellar binding and scraps of silver rolled into a ball. The second group includes pieces of a cloven silver bar, an oval pewter bar with a hole in the middle, narrow plates rolled into a spiral and wastes of pewter casting. The third group includes two small double radiate-head fibulae and over 1200 small sewn plates of different shapes. All these things date to the VI (V)-VII cc., but the date of burial of the hoard established on the base of small radiate-head fibulae is the end of the VII – the beginning of the VIII cc. And in order to determine the chronological boundaries of the existence of the whole settlement one should examine not only things of the hoard but also other dating finds from the site, such as fragments of Cherniakhov potteries (fig.43:16,17), a strap end (fig.45:2), a black glass bead (fig.45:3) etc. This investigation has made it possible to date the Kolochin period of the settlement to the second half of the V – the beginning of the VIII cc. Thus the analysis of the material shows the heterogeneous composition of the collection of Velikiye Budki. At the early Roman time it unites the Late Zarubintsy and Ukhnovo elements. The presence at the site Kolochin and Pen’kovka traditions as well as objects of Danube, Baltic and even nomadic origin at the Early Middle Ages is a result of a very difficult cultural-ethnic situation in the forest-steppe and steppe zone of the Eastern Europe during the Migration Period. Besides the long period of the existence of the Kolochin settlement allows to research the material culture of Slavonic tribes without chronological lacunae and makes the finds from the site Velikiye Budki particularly important.