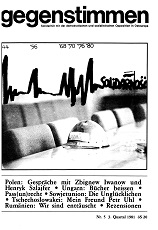 Summary/Abstract: In Czechoslovakia, repression and harassment on the part of the police and state apparatus against dissidents increasingly intensifies. After the monster trials in October 1979 against six members of the VONS in April 1981 more active oppositionists were imprisoned or released on trial. In Olomouc, six Catholics were brought to trial. Rudolf Battek, seriously ill and constantly under pressure for years, was sentenced to seven and a half years in the summer. Continuous surveillance of dissidents, regular arrests of up to 48 hours, control of visitors and the post office have only one purpose: to create a climate of fear so as to prevent any activity critical of the regime. Below is a report on the new wave of lawsuits in Czechoslovakia, an article by Jaroslav Suk on the situation of Petr Uhl and comments on the judgments against Battek and the Catholics.