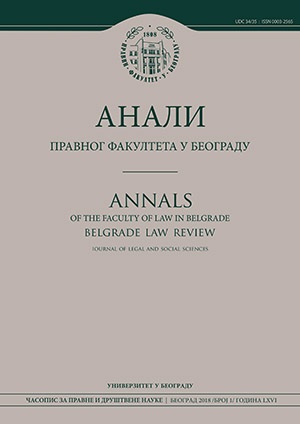 Summary/Abstract: This research concentrates on emergence and development of the principle of legality in the Russian law of 16th and 17th century. The pa per begins with a review of the thesis that Russian state was an oriental despotism and denies even existence of an idea about supremacy of law in any period of the Russian legal system development. For the purpose of contesting this thesis, deeply ingrained in the Western European so cial science, this article elaborates Russian legal sources of 16th and 17th century. Firstly, Sudebnik from 1550 as the first Russian legal document which contains a regulation that declares statute as the only source of law and which also provides legal procedures in courts and administration. Emergence of the principle of legality in Russian law is usually brought into relation with social, organizational and territory changes that Mos cow Russia was undergoing at the beginning of rule of the Emperor Ivan IV. In addition, this article is analyzing provisions of Ulozenije from 1649 that speak about further development of the principle of legality in Rus sian legal system of 17th century.