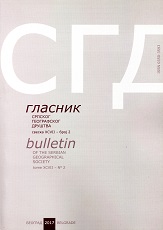 Summary/Abstract: Zapadna Morava River basin covers a surface of 15850 km2, which is approximately 18% of the territory of the Republic of Serbia. In its basin, 38 active surface stations are registered. The goal of this paper is the trend analysis of the mean annual river discharges in the Zapadna Morava River basin and their noticing in a longer series of time, as well as determining their intensity. Fifty years period of time (1965 - 2014) is taken for a time series. Because there is no empirical data for mean annual discharge values for all stations for the given period, the number of the hydrological stations, which are processed in this paper, is reduced to 21. Mann-Kendall test has been used for noticing the trend, Sen test has been used for estimating the curves inclinations of the linear trend, while Pettitt’s test has been used for determining the turning point of change. Also, classification of the years by water richness has been performed in this paper in order to determine wet and dry periods. For the needs of identification of medium watery, wet and dry years, the combined method has been used on the data examples from representative stations in the basin. Based on the processed data and the obtained results, it has been established that the most rivers in the basin of the Zapadna Morava River have a slightly decreasing trend of the flow values, whereby the change of the trend is not significant. On the most rivers, the change period has begun in the early eighties of the past century. On a large number of profiles, the watery period was appearing in the beginning of eighties, while the dry season is characteristic for the period from 1990 to 1994.