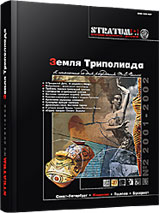 Summary/Abstract: The article publishes imported steppe shell-tempered pottery decorated with «caterpillar ornament». Sherds of several vessels were found in the remains of several dwellings of settlement Miropolye related to the Eastern-Tripolye culture (Corsun’-Shevchenkovskiy district, Cherkassy county, the Ros’ basin, excavations led by E.V. Tsvek). The pottery is well known on settlements of Sredniy Stog 2 type located on the Dnieper sub-rapids. The settlement, besides, yielded the local coarse pottery decorated with rows of the so-called stitch ornament, made with the help of a combed stamp that left horizontal prints, which corresponds to the traditional ornamentation on pottery of the Sredniy Stog culture. The fact that imported Sredniy Stog pottery and its imitations were found on the Tripolye settlement, which is well dated by the early stage BII, allows a more precise dating of the settlements of Sredniy Stog 2 type, and thus to analyse appearance of the «caterpillar ornament» in more detail.The first part of the article gives a general characteristic of Miropolye, analyses its material complex and chronology. Particularly, the stage of existence of the settlement within development of the Bug-Dnieper variant of the Eastern-Tripolye culture can be identified as a rather late one. The settlement thus predates only the settlement Garbuzin where the coarse pottery with corded ornamentation already is known, but follows such settlements as Shkarovka and Vesely Cut, which do not know yet «caterpillar» ornament on pottery.The second part of the article gives a detailed description of the imported pottery of the Sredniy Stog type and the pottery with «Stog» ornament. The authors suggest exact analogues of this pottery from the Dnieper sub-rapids settlements of the Sredny Stog type. Based on relative chronology of the Miropolye settlement they try to analyse the place of these sites in the system of steppe Eneolithic antiquities. An important aspect of this analysis, which makes the published records most valuable, is a study of appearance of coarse pottery with «caterpillar» and corded ornaments in the steppe and Tripolye cultures.