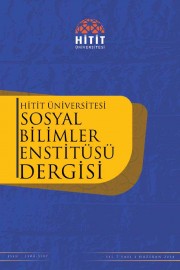 Summary/Abstract: Vardar Yenicesi (Yenice-i Vardar) which was connected to the province of Thessaloniki during the Ottoman Period, is today located within the bordersof Greece and named by Giannitsa/ Yannitsa. Vardar Yenicesi was conquered by Evrenos Bey during the period of Murat the Ist, and shortly thereafter became a center of Ottoman culture as a reult of the settlement of Turkish speaking people. When tezkires, which are the main sources of classical Turkish literature, are examined, it can be found that Vardar Yenicesi trained more poets than many large settlements. Despite Vardar Yenicesi being a long distance away from İstanbul, the city which was the cultural center of the Ottoman Empire, it is the source of the poets and the reason for this is the influence of its mystical atmosphere. Vardar Yenicesi, which was under the auspices of Evrenesoğulları, was turned into a prosperous city as the result of a mosque, a madrasas, numerous precincts and hans being built.