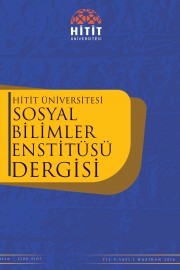 Summary/Abstract: Although handcrafts, which were developed in order to meet the needs of humans since ancient times, have been one of the main activities for living, in our time it is generally adopted as a leisure time activity. Handworks are classified according to various criteria. The classification according to the use of raw materials including fiber, wood, stone, soil, metal, leather and animal remains, thin tree branches, stalks and wooden strips in handcrafts currently maintains its validity in our time. It is known that several handcrafts were used in Çorum province throughout the ancient times up to the present. Motives that are specific to the region were used for ornamenting these handcrafts. The motives that are used in handcrafts are a part of Turkish folk culture in which the feelings, thoughts and lives are reflected. The preservation of Turkish culture is of crucial importance for maintenance of regional cultural inheritance. The motives which are used in handcrafts are indicators of the Turkish culture and identity and they differ according to the regions where they have emerged and therefore they are referred with different names and details. It is due to these reasons that an inventory of the handcrafts and of the motives that are used in them should be prepared and that they should be inherited to future generations in order to assure their preservation. In this study, the handcraft works which were produced in Çorum Province of Turkey were classified according to their raw materials and the motives which were used in them were investigated. Thereby, a catalog which classify the motives that were unique to the region were developed.