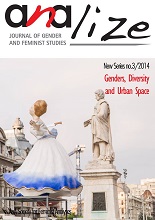 Summary/Abstract: The present study is grounded on the premise that street names represent an embodiment of the socio-political order in the realm of everyday life (Azaryahu 2002, 135-144). It develops on three complementary axes of interest: a descriptive statistical analysis of power distribution among genders and professional categories in the current configuration of street names, a case study of Ion Câmpineanu Street as a ‘memorial landscape’ (Dwyer and Alderman 2008, 165 – 178) and the street's subjective history as it is recalled by locals in semi-structured interviews. Research’s findings sustain the idea that individuals invest personal or contextual significance endorsed with emotional resonance, in street names and rarely reflect upon the personalities naming their streets. The case study outlined Ion Câmpineanu Street as a self-contradictory, vivid landscape, an urban setting where several versions of history vindicate their memory. The analysis of street names in sector one reveals an unequal distribution among genders in favor of men, who are prominent in naming streets. The novelty in the present inquiry emerges from a gender sensitive approach upon the subject of street toponymy and social memory. Street names are understood as an embodied instrument employed in the social construction of gender in urban spaces.