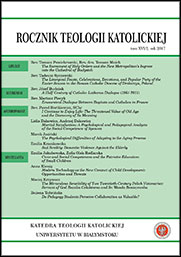 Summary/Abstract: The pursuit of the unity in the Church is the primary task of all believers in Christ. This pursuit should take place on every level: spiritual (through prayer), practical (through concrete actions), and doctrinal (through dialogue about the main truths of faith). In the past 50 years (1967–2017), many common positions between Catholics and Lutherans have been worked out and recorded in the 2013 document From Conflict to Communion. October 31, 2016, which marked the 500-year anniversary of the Reformation as well as the 50-year anniversary of Catholic-Lutheran dialogue, has changed the way that Catholics and Evangelicals view each other. Pope Francis, as a representative of the Catholic Church, Bishop Munib Younan, and Fr. Martin Junge, who represented the Lutheran World Federation, co-hosted an ecumenical celebration that took place in Lund, Sweden, inaugurating the 500-year anniversary of the Reformation. After the service, a joint document entitled Joint Declaration on the 500th Anniversary of the Reformation was published. The document concluded with the following message: “We call upon all Lutheran and Catholic parishes and communities to be bold and creative, joyful and hopeful in their commitment to continue the great journey ahead of us. Rather than conflicts of the past, God’s gift of unity among us shall guide cooperation and deepen our solidarity. By drawing close in faith to Christ, by praying together, by listening to one another, by living Christ’s love in our relationships, we, Catholics and Lutherans, open ourselves to the power of the Triune God. Rooted in Christ and witnessing to him, we renew our determination to be faithful heralds of God’s boundless love for all humanity”. The 50-year Catholic-Lutheran dialogue should be an encouragement for Christians to testify together to a wounded and the divided world, to more passionately pursue further dialogue in order to overcome existing differences, and to be open to unity, which is the source of our common hope.