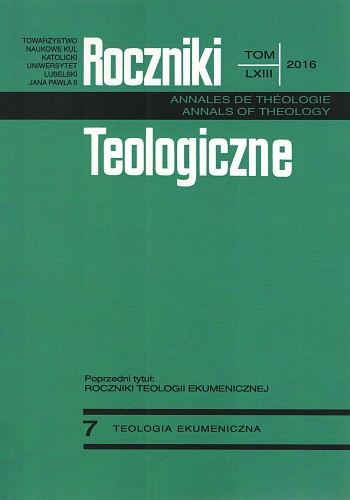 Summary/Abstract: The Church, being on the way to its unity in diversity, should make use of its rich history. There can be found the examples that may be helpful in the reconciliation process of not only the Churches, but also cultures and nations. The paradigm of the reconciliation process are, among others, the Apostles of the Slavs, saints Cyril and Methodius. In his “Slavic encyclical” Slavorum Apostoli (SA), the Pope John Paul II called them the authentic protagonists of ecumenism who effectively strive “to remove or reduce any real or even apparent division among individual communities belonging to the same Church” (SA 14).Reverend professor Leonard Górka, both a witness of ecumenism and a great advocate of the Cyrilo-Methodian tradition, and a longtime researcher and teacher in the Ecumenical Institute of the Catholic University of Lublin, often mentioned the saints in his speeches and publications. He emphasized that the saint Solun Brothers, due to their personality and achievement, are figures that make all Christians sensitive to the longing for union and unity between the two sister Churches – Eastern and Western. His testimony can be the reference point for those Christians who engage all their forces in the process of unification in diversity.