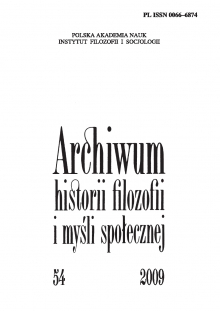 Summary/Abstract: Neoplatonic commentators (and among them Boethius) usually pose in their commentaries a question about the subject-matter of the text they are commenting upon. This question is often phrased as the question about the aim (intentio, skopos) of the work. In his commentary on the Categories Boethius states, that Aristotle’s aim was to write not about things but about words. This statement was taken by several historians of medieval philosophy as to be a sign of Boethius’ antirealist or nominalist position. However on a closer look this statement doesn’t entail any nominalist attitude towards universals (by universals I mean genera and species of the Categories, but also the categories themselves, considered as classes). In fact Boethius combines his position on the aim of the Categories with several realistic statements. What is more interesting, his position on the aim of the Categories is not only compatible with realism towards universals, but is also a part of a broader strategy, which serves to defend neoplatonic metaphysics against Aristotle’s empirist claim, that what is substance in the highest degree is the first substance, the material individual.