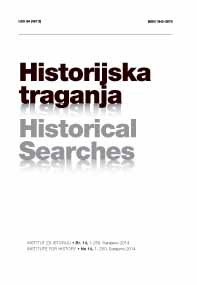 Summary/Abstract: Ahmed-pasha Kalailikos appeared on the historical scene in times when the Ottoman Empire went through serious turmoil, and the most obvious manifestations of it were quick replacements of people who briefly occupied certain positions. Originally a Greek, he converted to Islam. Western sources portray him as a persistent enemy of the Christians. Intolerant attitude he showed right after taking the office of the Kaymakam of Istanbul (1692), cost him of his position. His animosity was aimed at Christian (Orthodox and Catholic) population, but also at diplomats and their personnel. Having lost Azov (1696), he decided to escape to Persia, at the time when they begun to display aspirations towards certain Ottoman territories. From 1696 to 1703, he is not mentioned, and therefore it is not possible to say with certainty when the Porte granted him pardon. It presumably happened after the Karlovac peace (1699), which gave Porte the prospect to regulate relations with their Persian neighbour. The whirlwind of rebellion in Edirne during the summer of 1703 once again brought him to the forefront. Finally, in the autumn of 1704, he managed to obtain the position of the Great Vizier. However, due to his unpredictable nature and traditionalist politics to which he was inclined, he did not succeed in retaining this vizierate.