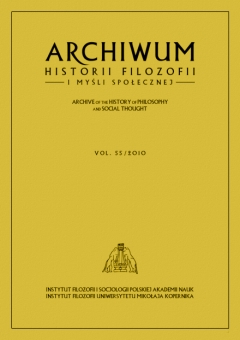 Summary/Abstract: Light and darkness were central motives in the Bible and in the Platonic tradition (Plato, Plotinus, Proclos). First and foremost light was the essential element and the basic principle of existence and cognition in the philosophy of Pseudo-Dionysius Aeropagite. His metaphysics of light contained imagery that inspired builders of French cathedrals and provided Christian thought with rich presuppositions and themes. The main purpose of the article is to highlight the Gnostic aspect of the reflection on light in the writings of Pseudo-Dionysius. The author of the Divine names speaks of light in a figurative sense and compares its physical properties to the process of transmission of knowledge. He uses the term “light” to describe the actualizing powers of God or God’s sovereignty over the world that he identifies with goodness. This goodness is also described as “supersubstantial light” which as a transcendent Unity permits divine intellects to partake of the supreme knowledge about themselves. Thus light is shown as essential to the transmission of knowledge. It constitutes the process of enlightenment and supports the hierarchical process of transmission of knowledge. Assuming that this is a correct reading of Pseudo-Dionysius Aeropagite the authors conclude that contrary to the predominant interpretation his philosophy PseudoDionysius did not describe emanations of beings but transmission of knowledge. Which in turn indicates that he developed his theory as a part of Christian philosophy rather than neoplatonic thought.