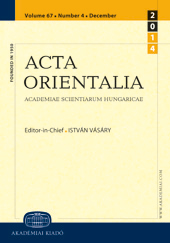 Summary/Abstract: The use of special carpets, textiles, leatherwares and cloths produced in the Ottoman Empire (sometimes in the Balkans) became a generally accepted custom in the Hungarian households of the 16th century. According to the customs tariff, these goods were constantly traded. A small part of them was transported to the markets of Vienna and other western European cities by Hungarian, Serb and Ragusan merchants. Serb soldiers (called Rác by the Hungarians) settled down in the fortress town of Győr and Komárom (situated on the western part of Hungary) already in the 16th century. At the beginning of the 17th century, they started to pursue civil occupations and acquire citizenship in increasing number. It was at about the same time that the first representatives of the merchants, who were called “Greeks”, appeared. Both groups came to play a vital role in the transit trade linking West and East. In the mid-17th century, the “Greek” (i.e. Orthodox) merchants founded independent companies operating with limited autonomy in the eastern part of the Hungarian Kingdom and in Transylvania. These companies developed into significant trading centres of Hungary in the 18th century.