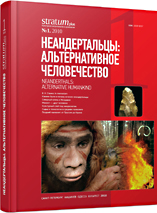 Summary/Abstract: The discussion about the origin of huge amounts of mammoth bones on some East European sites of the middle Upper Palaeolithic (24-14 kya) has a very long history. It goes back to the 1870-s, when two mutually exclusive hypotheses were put forward: 1) people, who lived on these sites, were mammoth hunters, and the bones in question represent the remains of their prey (A.S. Uvarov, I.S. Polyakov); 2) people, who left these sites, simply collected mammoth bones, as well as corpses of dead animals (V.V. Dokuchaev, A.I. Kelsiev, F.K. Volkov). After the discussion was resumed in the 1990-s, it has been shown that both hypotheses were flawed. First, there are no natural mammoth cemeteries in the Russian Plain (the only exclusion is the Sevsk cemetery, but it had never been exploited by the Palaeolithic man). Second, it is hard to understand how and why the corpses of mammoths (either hunted or scavenged) would have been transported to the occupation sites. The problem can be resolved if one suggests that the relation between man and mammoth in the period under consideration was much more complex than just the relation between the hunter and the game. It could have been a kind of symbiosis, similar to that described by ethnographers for a number of peoples of the North, who maintained symbiotic relations with the reindeer. To be sure, this hypothesis needs further elaboration and should be regarded as a preliminary one.