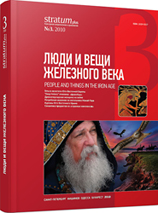 Summary/Abstract: The authors study semantics of early Sarmatian “hoards” found in the south of Eastern Europe, as a rule, near the foots of burial mounds and natural eminencies. The authors come to the conclusion that similar cult constructions were peculiar sanctuaries, which had been built by leading troops of these nomads as they were moving from east to west. In ancient societies, the conquest and mastering of new territories always began from the rite, which symbolically repeated the act of creation. The main element of this rite was the building-up of an altar.