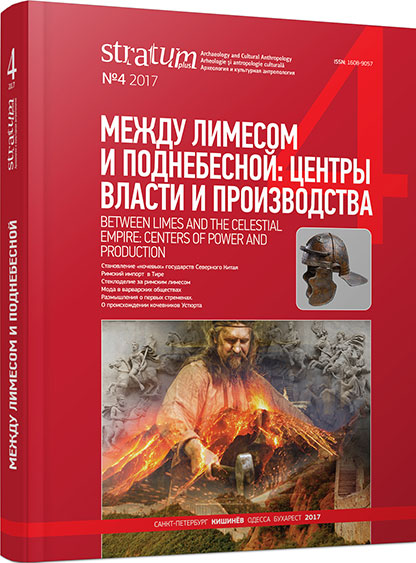 Summary/Abstract: In 2012, burial complex no. 298/298a was studied during the excavation on the territory of a suburb of Kartal hillfort. A battle belt, which is the key discussed issue in this publication, was the most interesting find in this complex. The items in the complex belonged to the two cultural traditions of the Roman Time: the Sarmatian and the West Baltic one. The massive buckle and the belt end-fitting belong to the latter one. In fact, these two items determine the increased interest to burial no. 298/298a. Their appearance in the Black Sea region is associated with the Gothic progress into this territory, so the dating could not be earlier than the turn of the 2nd — 3rd centuries AD (or cca 200). At the same time, the Sarmatian component of the complex allows a later date: up to the middle of the 3rd century. The historical and archaeological context around the Kartal hillfort in the 3rd century, including the settlement territory itself, suggests a comparatively late dating of complex no. 298/298a: not earlier than the second quarter of the century. In this case, the battle belt as a prestigious item could easily outlast ‘its’ time.