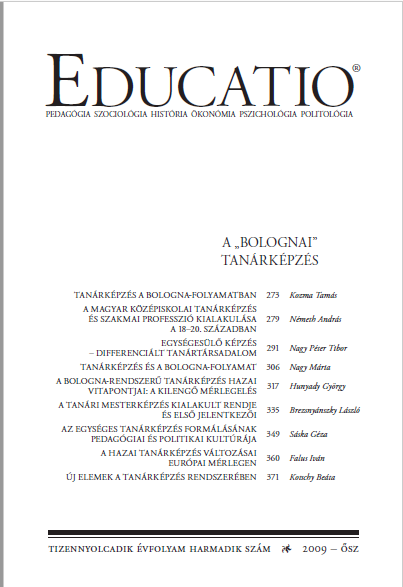 Summary/Abstract: The points of debate within teacher training in the Bologna system have led to differing evaluations. The radical reform concept put forward by the Ministry of Education and the markedly opposing opinions of Eötvös Loránd University clashed with each other in 2003, when the Hungarian model of teacher training within the Bologna system was born. In the course of the development of the Hungarian model, professional and organizational conflicts were resolved via compromise decisions; however, the resulting – and profound – changes brought about new tensions. This study points to the 5 main features (teacher training only at the master level, integrating professional and pedagogical knowledge, dual qualifications, the importance of empirical competence and organizational emphasis, volume and selection) of the model that has had its introductory phase in 2009; while it also presents the main objections against them, and lists and discusses the arguments in favor of revision. The history of the reform is, at the present time, too short and as yet unsettled for us to be able to draw final, empirical conclusions in relation to its direction and achievements. One thing is certain, however: the radical changes brought about in public and higher-level education make restoration of the form of teacher education present before the Bologna process impossible.