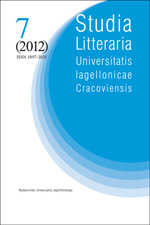 Summary/Abstract: Vladimir Solovyov (1853–1900), a great Russian philosopher of religion, in his concept of all-unity assumed an integrity of a human being and his natural drive towards realization of an ideal of good, truth and beauty. He was voicing a belief that these values, being an ethical imperative, should be rooted in foundations of faith in that morality, hidden inside us and manifested through conscience and reason, synthetizes everything that a person does. Believing that good – in nature, in a human being, society and history – has a Devine provenance, the philosopher was also emphasizing the need for action which proves a human calling to fulfil what is good – on every level of participation in life. This belief, shaken a bit towards the end of the philosopher’s life as a result of his difficult life experiences, remained strong enough to find its expression in the last decade of the 19th century in an important treatise The Justification of the Good (Оправдание добра), which to a significant degree is an attempt to “deal with” I. Kant’s moral teaching, based on rational premises, and amoralism of F. Nietzsche. This article outlines Solovyov’s perspective on ethics, which having evolved in his work, has as a result gained a status of a separate discipline.