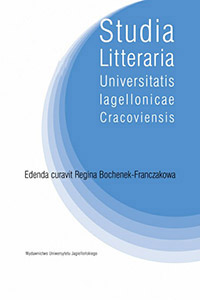 Summary/Abstract: The article is an attempt at complex apprehension of the synthesis concept existing in Russian literature during the Silver Age. At the turn of the 19th century, Russian authors, endeavoured to unite any forms and aspects of human activity, giving a complete – one that was not divided into separate areas, such as science, religion, philosophy, art – image of the world. The paper emphasizes that the synthesis concept, having native religious origin, acquired wide support from religiously oriented Russian thinkers (Vladimir Solovyov, Nikolai Fyodorov, Andrei Bely, Vyacheslav Ivanov, Pavel Florensky). They perceived the world as marked by God’s element called constitutional unity i.e. a unity bonding truth, goodness and beauty. Following Solovyov, renown artists wished to express the unity of the world by using symbols picturing connection between the visible and the invisible, the accustomed and the mysterious, the reasonable and the unreasonable. The art – especially poetry and music practised by inspired artists, becomes – in imitation of the Richard Wagner’s Gesamtkunstwerk concept – an important area of cognition unifying both the ethical and aesthetic tasks.