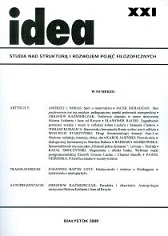 Summary/Abstract: The article Between Uselessness and Inculpating. The Functions of the Concept of the Original Sin in the Modern Catholic Thought concentrates on the meaning of original sin in the thought of the pope John Paul II. On one hand the concept of original sin seems to be useless since it is not used as an argument in the reflection on the concrete human suffering in the main document dealing with this topic, Salvifici doloris. The author discovers, however, that the concept of original sin may play a major role in the process of inculpating human beings. In this sense its function is similar to the concept of redemptive suffering that is the most important explanation of human suffering according to Salvifici doloris. The function of the latter is to change traditional meaning of the theodicy by creating a basis for what may be called “anthropodicy”, which is a tendency to accuse and justify man in the face of suffering in the world. In uncomfortable points of Christian doctrine absolute creativity of God is unexpectedly replaced by the powerful creativity of man.