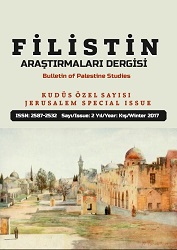 Summary/Abstract: The sacred city of Jerusalem lies at the heart of the political conflict between Israel and the Palestinians. The fact that both societies consider the city as their respective capitals necessitates the resolution of the divergent claims of sovereignty on Jerusalem as the key for the overall settlement of the Arab-Israeli conflict. This study addresses the positions of both parties as well as the international community on Jerusalem, which will be analyzed in an in-depth manner, evaluating Jerusalem as a political dispute according to the different protagonists.