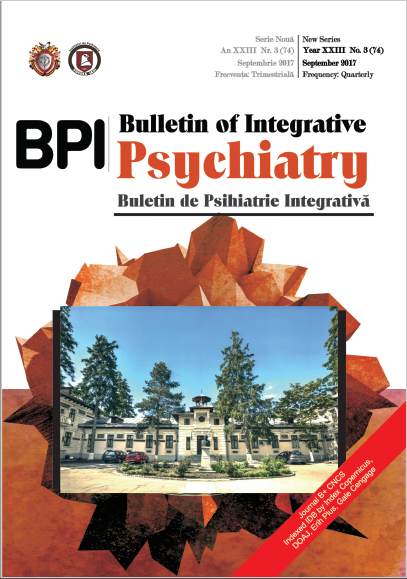 Summary/Abstract: Introduction – Post-revolution Romania is gradually beginning to benefit from a legislation that is focusing more and more on the needs of the society. In Romania, Law 487/2002 is the mental health law that protects people with mental disorders. Law 129/2012, which amends and supplements Law 487/2002, surprises us with legal developments designed to align us with the European standards. The aim of this study is to highlight the bio-psycho-social aspects of the non-voluntary hospitalized patients diagnosed with mental and behavioral disorders due to the use of psychoactive substances. Material and method – the study is quantitative and retrospective and the data processed was obtained from the medical sheets of non-voluntary admitted patients between October 2002 - July 2012 with diagnoses from the category of mental and behavioral disorders due to the use of psychoactive substances. The study sample included 29 non-voluntary patients that were admitted over a period of 10 years, to the "Socola" psychiatric hospital from Iaşi. Results – the distribution of the study sample according to gender and background shows the preponderance of male patients stemming from the urban environment. The average age of the patients from urban areas was 46.92 years, while the average age of those from a rural one was 40.20 years, which highlights the homogeneity of age according to patients’ background (t = 1.156, GL = 28; p = 0.292). Most patients are unemployed, unmarried and uninsured. Conclusions – non-voluntary psychiatric admission is a legal and ethical issue, and the paternalistic attitude of psychiatrists is often justified. Alcohol is the main substance of this diagnostic category that is associated with non-voluntary admission in a psychiatric hospital.