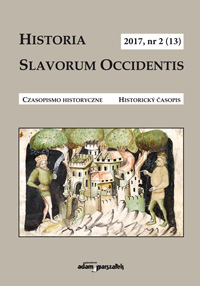 „Trochę za późno i za mało ale coś jest”. Polacy w Galicji wobec Aktu 5 listopada 1916 r.
“A bit too late and too little, but at least it’s something”. Poles in Galicia’s attitudes towards the Act of 5th November 1916

Summary/Abstract: During the outbreak of WWI, a majority of Poles in Galicia were in favour of the Austria-Poland solution. They hoped that once the Kingdom of Poland was taken away from Russia, Franz Joseph I would become the king of Poland. As a result, a new and powerful state would emerge: Austria-Hungary-Poland. In order to pursue this idea, Poles established the Supreme National Committee and the Polish Legions, a military force. Austria’s military defeats and general weakness of the monarchy put an end to these plans as the politicians in Vienna failed to be equally willing to pursue the solution. The initiative regarding the Polish cause was taken over by Germans and the Act of 5th November was proclaimed. This indicated that the reconstruction of the Polish state would be modelled by the Reich rather than the Habsburg monarchy. On the one hand, the proclamation of the Act of 5th November was welcomed in Galicia: it was the first document taking the Polish cause to the international arena. On the other hand, the end of the Austria-Poland idea led to resentment. Poles in Galicia were afraid that they would be left outside the new Polish state.