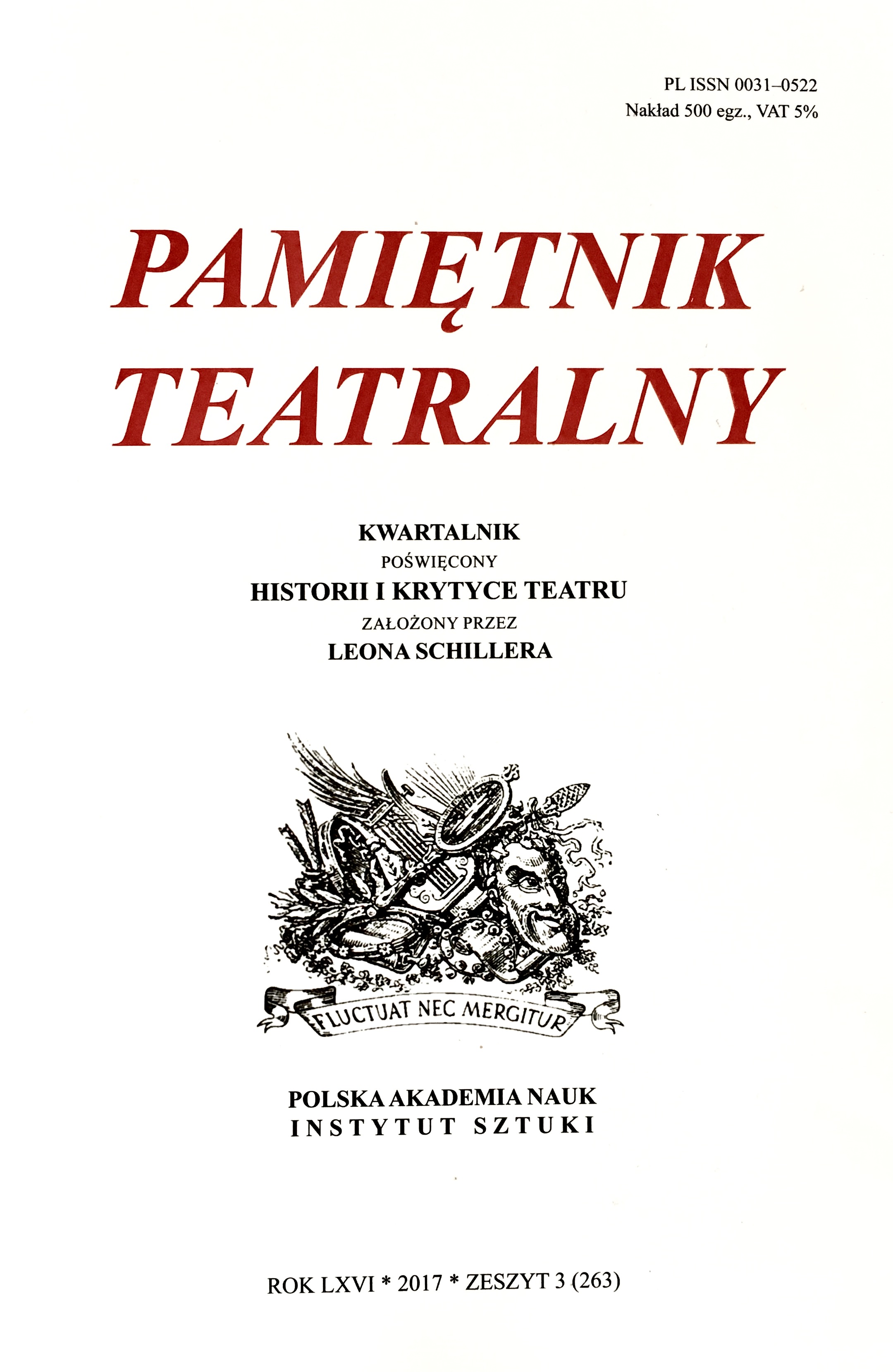 Summary/Abstract: The premiere of Sen [“A Dream”] by Felicja Kruszewska put on by the Reduta took place on 27 March 1927 in the Na Pohulance Theatre with stage setting designed by Iwo Gall and music composed by Edward Dziewulski. It was Edmund Wierciński’s directorial debut. The artist had been a member of the Reduta company, ran by Osterwa and Limanowski, since 1921. It was where he studied acting and directing. He gained some valuable experience in directing and staging when the Reduta toured the Eastern Borderlands in 1924. The company performed in halls unfit for the purpose and showed Schiller’s Wielkanoc [“The Easter”] outdoor more than a dozen times, which required numerous staging alterations. Wierciński was the one to make them, since he was the artistic director of the whole enterprise. In 1925 the Reduta moved to Vilnius. The company ceased to be a laboratory theatre it had been; as the only theatre in town it had to attract audiences; the methods of work changed, the number of premiere shows increased while the number of rehearsals and the amounts of time spent on thorough analysis of the dramas decreased; and the repertory now included best selling shows. The level of artistic quality lowered; and the search for novel means of artistic expression was replaced with naturalism. Wierciński would not accept it. His production of Sen was, as he put it, “a tempestuous and radical protest against the naturalism of the Reduta.”Girl, the protagonist of the play, has a dream that she has been entrusted with a mission to rescue her town from the Black Army. No one except for her sees the danger; no one understands her, and everybody is trying to set her back. The drama can be interpreted in various ways. In reference to the interwar period, the most viable reading is that it portrays Poland that has regained independence but is not able to really put it to her advantage, accepting the societal mediocrity and low morality.Wierciński wrung out the whole emotionally charged meaning of the text, thus putting on an expressionist show that relied heavily on deformation, caricature, mechanic movements, and repetitive gestures and sounds. Nothing looked onstage as it did in reality. Wierciński himself took on the part of Green Clown [Zielony Pajac], the most grotesque character of all.Most of the theatre reviewers criticised the drama, but they all agreed in their high appraisal of the theatrical production. Osterwa, however, deemed the show to be contrary to the Reduta values, which led to a split within the company. Wierciński with a group of other artists left the Reduta. The secessionists were then hired for a short period of time by the Nowy Theatre in Poznań, where Wierciński put on Sen again in September 1927. For the third time, he directed the play by Kruszewska at the Miejskie Theatres in Łódź in 1929. Wierciński was known to analyse his works thoroughly and eagerly. He considered Sen to be a necessary step for the development of theatre, yet he saw the pitfalls of venturing further in this direction, which might lead to the primacy of director and form over the creative potential of actors that would then be lost and unappreciated. All in all, Wierciński believed that the theatre should give precedence to the drama and playwright in determining the form of the play and that actors ought to be fully appreciated for their participation and involvement in the creative process. He followed these principles in his theatrical work more and more noticeably. His directorial debut was a spectacular protest that marked the beginning of an artistic journey from expressionism and dominance of form, through naturalism and socially engaged theatre, to the great poetic drama, from the primacy of form to a synthesis.