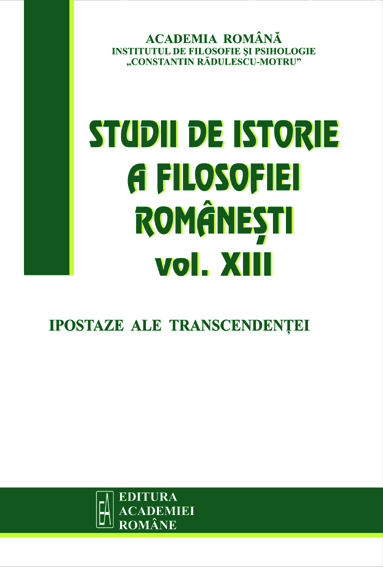 Summary/Abstract: The main aim of this article is to examine the reception of Descartes’ Metaphysical Meditations, as forms of spiritual exercises, in the sense proposed by Ignacio de Loyola, Foucault and McGushin, in the field of the Romanian philosophy. My thesis is that this lecture is possible in Constantin Noica’s work, Sketch for the history of how is it that there is anything new (Schiţei istorice pentru cum e cu putinţă ceva nou?) in which meditations are addressed as practices of disciplining the activity of the intellect and avoiding its “laziness”, synthesized as life of the spirit, by applying the Cartesian principle ne ratio nostra finietur, that I will largely expose among this paper. The working-hypothesis is that Noica finds a proper answer for the question “how is possible for our intellect to create something new?” in Descartes’ Meditations, criticising the French philosopher’s theory on innate ideas and arguing that it provides an explanation exclusively for how is possible for a subject to get to know what is unknown. Therefore, the intellectual creation and not achievement of something now, in the terms of the so-called “logic of invention”, remains a consistent problem. In the first part of my article, I will sustain my arguments against Noica’s position, based on the assumption that these two aspects – the unknown and the invention – are part of the life of the spirit, in which the new is possible only through meditations and becomes the result of what Descartes recognized as cogitationes privatae. In the second part of my research I will apply the test of “the opened concepts”, following Noica’s terminology, in order to analyse the determinations that terms such as “new”, “innate”, “ready-made judgments” and “possibility” have in the larger context of keeping the exigencies of meditation as form of spirituality in the project of early-modern rationalism.