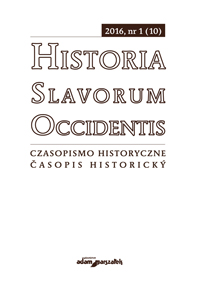 Summary/Abstract: The second half of the fifteenth century witnessed the beginning of lasting political and property careers of a number of families from Wielkopolska. Among them were, e.g., the Górka family, the Szamotulski family, the Ost-roroga family and the Czarnkowski family. The career of Przecław Potulicki, the castellan of Rogoźno (died 1486) is unique in this context. The founder of the future power of his family came from impoverished nobility. He did not hold any high office, nor did he play a greater role in political life. He did not possess any major royal domain, nor did he have income from church property. However, during 50 years of being active in the economic field, he amassed a fortune comparable to the latifundia of the greatest mag-nates of Wielkopolska at the time: four towns and 49 villages. This was done mainly by purchase, which cost him a total of: 9212 of Polish grzywnas, 785 Prussian grzywnas, 400 threescores of groschen and 2930 florins. The foundations of the importance of the Potulicki family established by Przecław turned out to be sound and lasting.