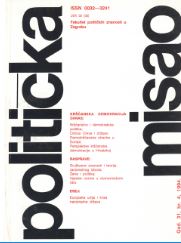 Summary/Abstract: The author points to the fact that Christianity and democracy have been the hub of the European cultural heritage. If democracy, in keeping with the American Declaration o f Independence and the French Declaration on the rights o f man and citizen, is defined as a political system aiming to protect human rights in a society, it can be demonstrated that this goes hand in hand with the social and political keynotes of Catholicism. It is Catholicism that dwells on human free will and the responsibility for choosing between good and evil. It also stresses man’s concomitant participation in the activities of secular and religious communities — the state and the Church — which are strictly separated. It ensues that the Church cannot be a partisan of any political party, including those built around Catholics’ secular activities. The Church also opposes the reduction of democracy to a mere multiparty power squabbling.