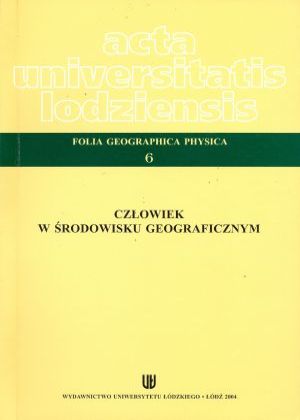 Summary/Abstract: The subject of the research is the lower Luciąża river valley, located in the central part of Poland. Differentiated geological structure, resulting from base tectonics and relief inherited from middle-polish ice sheets, influenced significantly natural complexity and differentiation of human influence on the valley. In the result of warmth and flora's incoming, a change in the river character has occurred (from the braided to the meandering one), already in Late Glacial, probably in AllerOd (before 10 9Z0 BP). The frrst fossil mineral record of human activity in the valley is a frreground level in the meander residual in Kludzice, dating from 3 6Z0 BP (the turn of the Bronze and Iron Ages). Partial burning of the valley resulted in cover plant conflagrations and intensified surface flow. The climate cold trend in Subboreal (5 OOO-ZZOOBP) increased wind impact. On the deforested bottom terrace sandy aeolian covers had formed before Subatlantic (until Z 200 BP). In Subatlantic (l 330 BP), organic sediments and sandy alluvial soils were created, as a result of climate warming. In historic times the man influenced the valley ever more intensively. Settlements were build, for example the embanked one in Rozprza, dated at 7t1l century. One of the main transportation routes of the Piast monarchy also led through the valley. The period of the Little Ice Age (1450-1750) and the then climate cooling and raising of the ground water level made people leave the valley and enter the plateau area. Luciąża river has been used for energy production. Largest changes have occurred during the last 100-170 years. The construction of railways and modem roads, deforrestation and building of two reservoirs - Sulejów and Cieszanowice artificial lakes has begun. Economic activation during and after the 2nd World War (melioration and hydrotechnical constructions) was of a great importance.