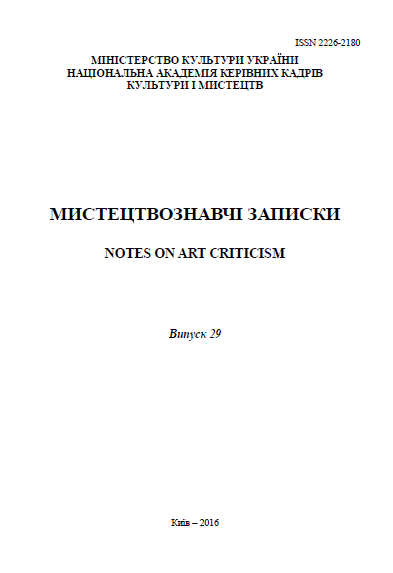 Summary/Abstract: English guitar music of the second half of the twentieth century in the aspect of artistic dialogue with the tradition of old English music is studied. The effect of the outstanding British classical guitarists on the process of updating the contemporary repertoire is traced. The role of Julian Bream in attracting professional English composers to write works for guitar is studied. Analytical research is aimed on creativity of Benjamin Britten, John Duarte, Malcolm Arnold, Stephen Dodgson and others. The emphasis placed on artistic aspiration of composers to engage in dialogue with the cultural heritage of old English music. The elements of the genre and linguistic inheritance of the lute works of XVI-XVII centuries in modern concerts, fantasies, partitas and suites is identified. List of the mentioned works shows that the concerts, fantasies, partitas, ballads, folk dances and suite cycles as traditional genres of English instrumental music of XVI – XVII centuries occupy a significant place in the new repertoire. Many of them are imbued with echoes, allusions, typical turnover and quotations from the works of lute masters of Elizabeth’s epoch. The accurate harmonic and tempo-rhythmical models of ancient dances for sections of individual parts or even entire pieces or cycles in some opuses are recreated. In other works cultural dialogue is conducted through mixing and comparison of different eras, linguistic and stylistic features of the musical fabric. Finally, the necessary associative array for listeners often is built by borrowing names of genres and individual intonations of old national traditional melodies, as well as using the dedications.