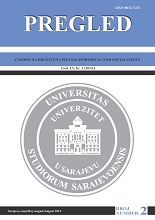 Summary/Abstract: The financial crisis of 2007-2008 undermined the confidence in the “market fundamentalism” unmasking in the process the cognitive capitalism’s cognitive and educational achievements- slogans that we live in a “global society of knowledge and skills”. The crisis of global financial institutions is the result of structural, cognitive and axiological crisis of neoliberal capitalism. The hegemonistically defined discourse on human and consumer rights are tactical deployment attempting to hide social outcomes produced by the crisis. The new knowledge economy tactically avoids confronting the dilemma whether or not we live in the actual knowledge society, or in a vamped up, controlling, monitoring and hazardous one? The depth of the social and political crisis, delegitimation of policies and practices formulated and set by (in)active financial institutions call for intelligent and socially sensitive transforming of existing or establishing new financial institutions that would be in the service of the people and the community of nations, instead of being in the service of extra profit. Specifically, an order that called globalist “cognitive capitalism” based on the dominance of economic reductionism and technological determinism in the form of lack of understanding of social meanings of ICT. Such systems are largely carried out transnational corporations, international political and financial institutions such as the World Bank, the IMF and the World Trade Organization. That capitalist institutions for decades, worldwide, controlled social policy states that depended on their help, and imposed neoliberal economic model of development that a large number of people pushed into even greater uncertainty, hopelessness, radicalism, isolationism, and above all to the brink of humiliating poverty. However, this situation has now changed significantly because of the global crisis of capitalism, and it shows that without joint action of the entire international community and transparent, largely reformed, international financial institutions, there is no effective response to global problems.